I’ve always said that collecting and restoring film is like James Bond without the women.  You have international intrigue, shady characters, plots and crossplots and unexpected villains.  This is an idea that isn’t unique to me, however, since “Wild Bill” Everson came up with a movie serial parody that was actually produced as Captain Celluloid Vs. The Film Pirates (1965).  There’s also a famous anonymously written USENET parody about film collectors that was surreptitiously posted several years ago on alt.movies.silent that is formatted as an actual James Bond film.

But once again, fantasy is outpaced by reality.  Let me preface this, as I always do, by stating that I’m not making any of this up.  I’ve changed the names to protect the innocent and the guilty, but I didn’t fabricate anything. 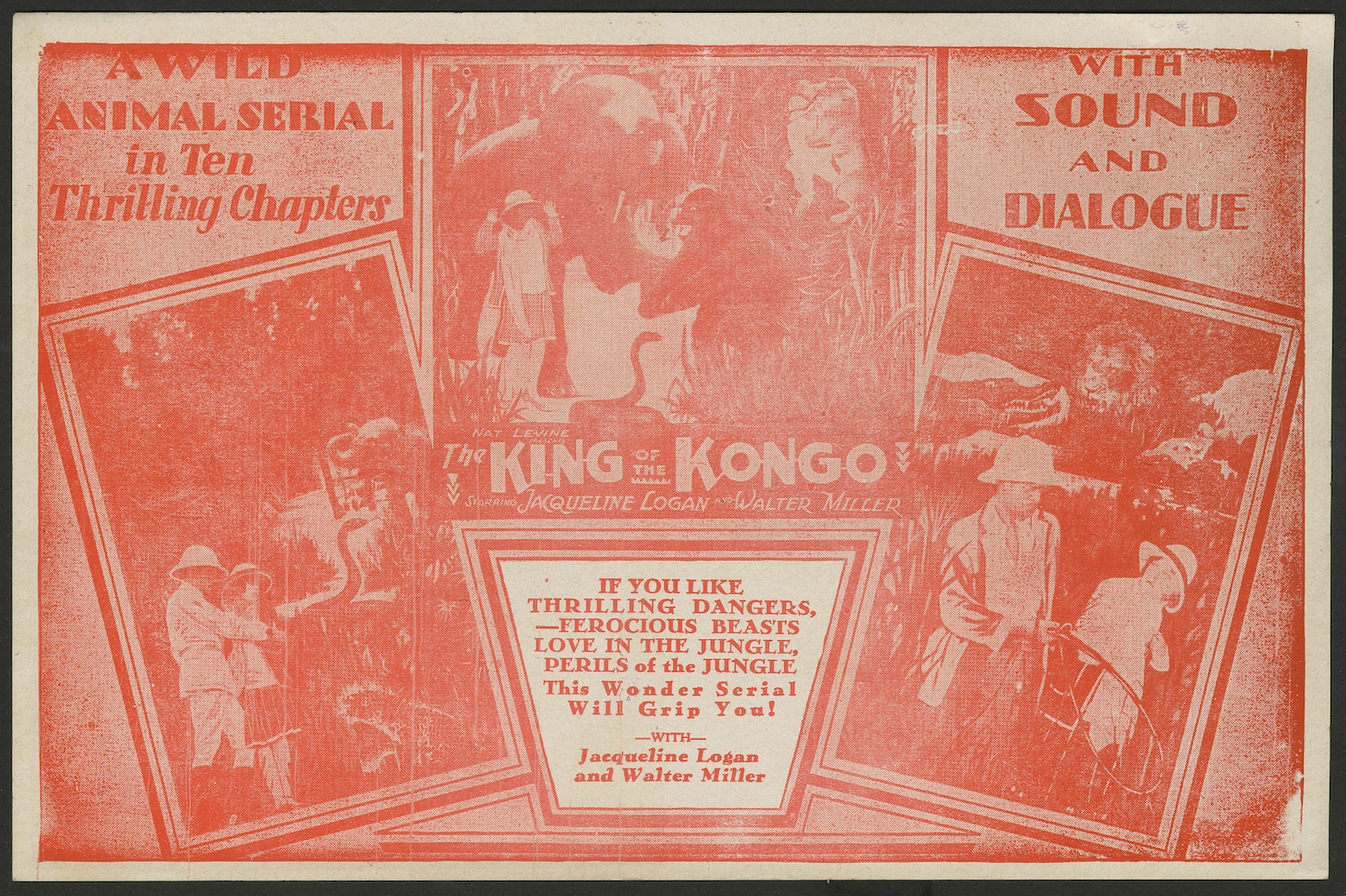 In August, I put up a Kickstarter campaign to restore one episode of King of the Kongo (1929).  Many of you regular readers will remember that this is the first sound serial ever, and that I have a 16mm silent print of the entire serial, but only three reels of the sound are, well, accessible.  These are on Vitaphone discs, which were carefully transferred by Ron Hutchinson at The Vitaphone project.  I use Ron’s real name because he’s a good guy, and I have nothing bad or controversial to say about him whatsoever.

I’d been working with another fellow who shall, however, remain anonymous.  I had advised him on setting up a computer-to-film conversion process and even did a considerable amount of help for him in getting some Cinemascope conversions done digitally.  He quoted me a very nice price on getting the restoration printed to film.  I knew this was important because I’d promised to premiere the restoration at the Syracuse Cinefest, and they need the film on 16mm.  For the sake of this posting, we’ll refer to this gentleman as Red Grant, to use a Bond name… and it’s actually fitting.

As I was preparing the Kickstarter project, I posted a notice about it with a group that is dedicated to the preservation of serials.  Let’s refer to them as SPECTRE.  Now, innocent me, I thought if I was preserving a serial, then I was on the same side as SPECTRE.  Not so, my friends.  It seems that SPECTRE wants to do its own restoration of King of the Kongo and that they felt what I was doing was a waste of time and effort.  Again, innocent me, I thought, gee, we’ll pool our resources and share what we’ve got to do the best job possible.  It seems that the SPECTRE chief just wanted me to go away, because he “knew where a 35mm of Kongo was located,” and he “knew of the existence of several more discs.”  He didn’t actually have any of this stuff, whereas I had all of my materials, but he knew where it was, you see.  And I was competing with him, at least from his standpoint.

This aspect of collecting is one that still infuriates me.  I guess SPECTRE didn’t really want to restore King of the Kongo, but they wanted the credit for restoring it.  Knowing where something is and having it are two very different things.  I know where more Kongo discs are, too, but they are in the hands of a reclusive collector who thinks he has something worth a lot of money.  And that’s more money than it’s worth, more money than you could ever raise from selling copies, and basically pointless.  The fact that SPECTRE was actually rallying cries against me and hoping for my failure in the face of their own inability to obtain materials is just confusing.  I am reminded of Samuel Peeples’ line, which, in summation, says that this kind of reasoning is like “trying to bisect a sneeze.”

So, I got the grant (thank you again, donors), and I had a company do the scanning for me that did a bang-up job.  The problem was that the print was banged-up, too.  Actually, it was the pre-print that was banged up, the 35mm nitrate that my print was copied from.  There were also a few sections that were printed out-of-frame, a Mascot Serials trademark that I hadn’t noticed in my quick-and-dirty transfer done on my home equipment.  As archivist DJ Turner has said, “Sometimes [a high-resolution transfer] doesn’t do these old films any favors.”

I had to do a lot of surgery on Kongo to make it look halfway right.  I could keep spending time on it, hand-tweaking it even more, but it actually looks fairly good now.  I matted out the out-of-frame sections, rebalanced the black-and-white contrast on a shot-by-shot basis.  I hadn’t counted on the huge slow-down such a thing would cause my computer, but it was a massive computing task.  Red Grant had told me that he’d need the file by early December, so that was my goal.

I worked extensively with David Wood (a good guy, so I’ll use his name.)  Dave is the equivalent of Q in this story.  In fairness, I was the picture Q and Dave was the audio Q.  Dave asked me a question I thought no one would ever ask me: “Was this transferred with an RIAA curve or a Vitaphone curve?”  Well, I knew Ron had done the transfer work, but knowing curves was a pretty arcane thing that I wouldn’t expect most people to know.  It turns out that the needle and transfer arm of a record player are calibrated to a certain equalization curve, much like you’d use on your stereo.  Dave had discovered that there was an official Vitaphone curve (something I never knew).  So he applied an inverse RIAA curve and then a Vitaphone curve, and the sound was vastly improved.  He also matched the speed with the footage I had.

Now, if you understand what I just said, then you have some recording knowledge, and it will impress you.  If you didn’t understand it, then please come away with a vague sense of awe for what Dave was able to accomplish.

I had to do a little minor surgery on the sound, but it basically fit, and I married track to picture and watched the results.  Pretty good!

Then I sent a hard drive to Red Grant.  Red took his time getting back to me. Before all else, he denied ever knowing about a time deadline, which I had clearly outlined in both the Kickstarter project and in emails to him.  Then he said he was having problems with the soundtrack, and then he couldn’t do it.  He promised to look into an alternate way of doing the soundtrack.  Fine.

This made me panic.  As part of the project, I’d promised to produce a film print.  I started looking for other places.  I posted on international film groups.  I found a place in Norway, a place in Germany, a place in Italy, and a place in NY that sounded like they could do it.

I’d specified 16mm output, but most of the places I contacted were limited to 35mm output.  Only two places, a guy in Italy (we’ll call him Largo) and a film lab in NY (we’ll call him Felix Leiter) could do the 16mm that I needed.

Meanwhile, back to Red Grant.

Just before Christmas, I heard from him.  I’d asked him if he could do anything to expedite the process… anything.  Then I got the answer.

Mr. Grant told me that he’d be happy to expedite the process.  All I’d have to do would be to send him some rare footage that I’d promised not to let out of my hands.  See, I have this problem… when I promise someone something, I keep the promise.   If I treat someone shabbily, then I’m not likely to hear back from them in the future.  I always figure the right way to treat people is on the straight and narrow.  (And that way I get more film, which is what I want anyway!)

So Red Grant, knowing that I had some material I would not let him copy, and sensing that I was over a barrel, figured he could blackmail me into giving him some rare film.   He also didn’t count on one thing: I’m a pretty easy guy to get along with, but when you try to screw me over, as Red Grant did, I’ll crawl through the depths of hell with infected knees before I’ll let you win.  In short, he’s not getting anything from me… ever.

But the drama isn’t over.  You see, Felix Leiter wants four times the money I had allotted to make the print, and Largo only speaks English through fractured Italian, so getting him a file as large as Kongo is a problem.  Also, Largo only makes a color positive print, whereas I’d stipulated a black and white negative.  Largo’s price is quite reasonable, but it’s not the product I need.

In the meantime, I sent a special envoy to talk to Felix Leiter, hoping that he could be talked down from the stratosphere of budget breaking.  That’s not gone well, either, since my special envoy just had to go to the hospital emergency room.

(Deleted here is a long Bondian sub-plot involving TV network head George Kaplan and the possibility of showing Kongo and even the Dr. Film show on national TV.  Trust me, it’s real… if you want to know about it, post a message in the comments or on the Dr. Film Facebook page.)

So how does this end?  Who will make the print?  Will it be Largo or Felix Leiter?  Will the print be finished in time for the Syracuse Cinefest?  Does George Kaplan exist? Will Kongo appear on his network or another one, and what of the fate of the mysterious Dr. Film?  Will James Bond be able to rescue the secret formula from the clutches of… oh, wait.

I really have no idea how this will end.  A lot of this is out of my hands.  I can only tell you that if it follows the pattern we’ve had so far, it will be dramatic, twisty, and unpredictable.  Welcome to my world.

Followup: Don’t miss continuing adventures as this plot continues to thicken.  Here is the next article in the series: Welcome to Brazil, Mr. Bond!

18 thoughts on “James Bond Meets The King of the Kongo”