I’m bad at marketing.  I’ll be the first person to tell you that.  I can fix your computer, but I couldn’t convince you to buy one.  Some people are just built that way.

When I shot the pilot episode for Dr. Film, I thought that people would be jazzed about it, that they’d put it in the DVD player, watch it, read the material I sent, and we’d have a deal.

I sent it everywhere I could find an address.  I had some printed material that I’d prepared explaining what the show was.  I thought it was fine.

Of course, no one responded.  Not one.  They didn’t even say that they didn’t like the show.  I then discovered a fundamental truth of life (although I knew it before, it was really hammered home):

People will flock around to tell you what’s wrong with a failed project, but while you’re working on it, they say nothing.

My friends agreed that I’d screwed up by not having a slick cover color folder for the show.  Then the consensus was that no one would read all the material I sent, so it needed to be cut down.

Wow.  All great ideas.  I’d never thought of them.  Of course, no one thought to tell me this before I sent all the material to all the TV stations.

I couldn’t hire an artist.  Artists need to eat three times a day, so they can’t work for free.  And since I didn’t have any money to give them, hiring an artist was out, out, out.

OK, that’s fine, say I.  I have some experience in this.  I may not be the greatest artist in the world, but I think I can get the job done.  Hmm, the show’s characters interacting.  In the same shot.  Emphasizing film.

I got an inspired idea.  Anamorphia is so named because she’s anamorphic: she’s squeezed horizontally, like someone who survived an Edgar Allan Poe torture, unlike Glory, who plays her.  Just for one shot, I knew I could get them together, but only if I lined them up just right.

I’d give Glory an extra large reel of 35mm film, with a diameter twice as large as a regular reel.  Then, I’d shoot her dead on straight ahead, and I’d be standing next to her.  The math would work out so I could squeeze her in a photo program and it would make the wide reel look like a regular one!

How would they interact?  Well, in the show, the characters are always bickering about how long-winded and boring he is about film.  She’s gotten frustrated with his verbose habits and wraps him in the film he’s been talking about too much. He’s angry, she’s angry, that’s consistent, PERFECT.

By this time, it had been over a year since we’d shot the show.  But that’s OK, we thought, no one saw it in the first place, so we can still send it out with the new slick paper brochure!  I needed help, because I couldn’t shoot it myself: I’m actually in the shot.  I talked to my sister about it.

ACK. Glory is shorter than I am, and my sister is shorter than I am.  My sister had the idea of shooting outside to make sure we could get lots of light.  That made harsh unflattering shadows, but there was a worse problem.  Due to the widely varying heights, nothing lined up, and I looked like a giant slug being wound up by a tiny silkworm.  It was ridiculous.

Glory complained that the reel I’d found for her was actually full of real film!  This was a problem because a 3000’ reel with film on it is heavy, and she had to hold it very still, and straight horizontally, to get the shots.  Not a good idea.  She was pretty sore by the end of the shoot, and I don’t blame her.  Especially since the pictures were utterly unusable.

Upon reflection, I remembered that Glory (a historian) had just written a National Register nomination for a building with a large stage.  If we could use it, then we could stand on the stage, and have a photographer stand on the main floor, thereby solving the height issues.

I also decided I’d be seated, which helped equalize the height differential.  I found an empty reel, and that made it a little easier for her.  The building owners allowed us to use the stage for a few hours.  I brought in lights, tripods, everything.

It was HOT!  The lights were in my face all the time, and I was wrapped in disintegrating film.  I used a vinegary print of From Russia With Love so I wouldn’t ruin good film!  It smelled terrible, and as I was sweating, it dripped dye on me.  Wonderful.

We spent about 2 hours shooting.  My friend Greg shot the pictures this time.  (My sister couldn’t get off work!)  Greg tried really hard, but 99% of the pictures were junk.  There was one picture in the whole bunch that looked OK.  It was very dark, even with all the light we had pouring on us.  It was just a hard picture to shoot.

I’m not going to show all the raw pictures, because I’d had Glory stand closer to the camera (to keep me from overwhelming the shot).  This caused some focus issues and makes her look unusually large in the raw image.

I worked on equalizing the exposure and applied the anamorphic factor, and got this: 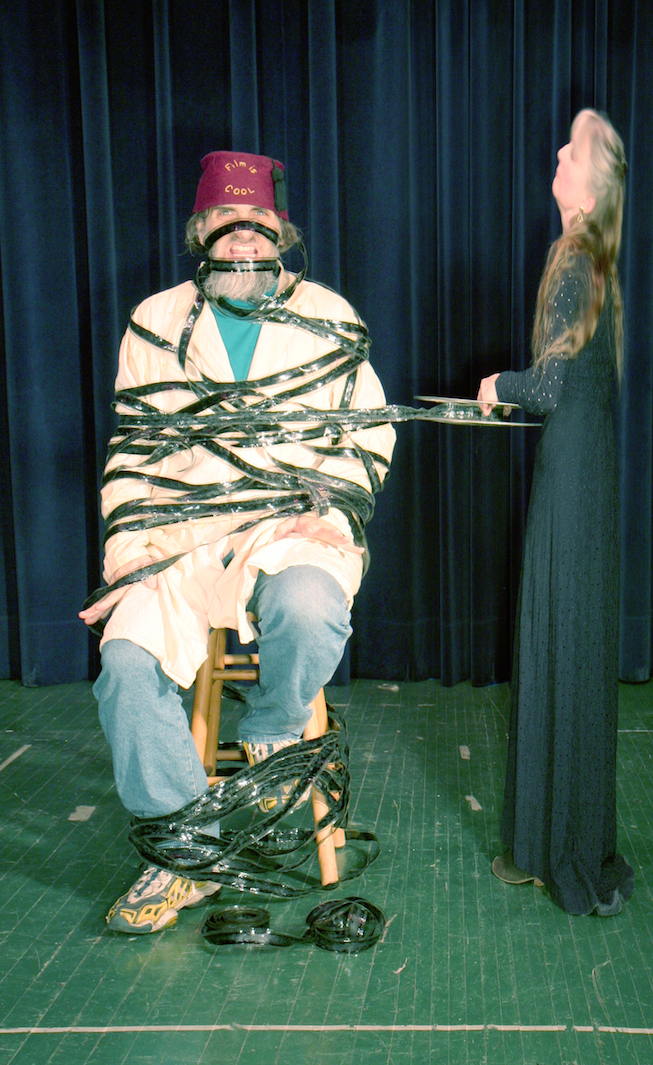 Suddenly, voila, we have art!  Dr. Film and Anamorphia in the same shot!  I used the picture for the new brochure and spruced it up.  I thought it looked pretty good.  We ran it by some design people.  They liked it.  I cut the text down to 8 pages, with lots of color pictures.

Guess what?  This will surprise you.  No response.  Apparently no one even bothered to look at it.

Discouraged?  You bet.  I was about ready to give up on the project.  We’d thrown time and money at it, and no one cared at all.  We weren’t even interesting enough to warrant a polite, “HEY! Buzz off, willya?”

But Dr. Film also seems to be The Project That Never Dies.  There are always a few people who have been unfailingly encouraging, to the point that some people are in my face saying, “It’s a great idea!  Don’t give up on this show!”  (I’ve never actually been sure why this is, but it seems to be.  Most of the rest of the world looks at Dr. Film with a cold indifference.)

I installed a blog on the web page, the one you’re reading now, updated the site, and went from there.  The blog, as you can see, has been a rip-roaring success, attracting email from Viagra shippers the world over.  With no real web traffic and only a tepid response to the blog, I was ready to shut the project down again.

Several others suggested that Dr. Film was too long.  The feeling was that we needed cut it down and make it in 30 minutes, based on the attention span of modern audiences.  This is where I draw the line.  I have a two-fold argument with this: a) there are so many interesting movies out there that don’t get shown that I hate to CUT them to something shorter.  b) A 30-minute show is actually more work than a two-hour show!  Why?  Well, I have to go through more material, cherry-pick, and edit.  More narration to explain what’s missing.  More shooting.  More work.

The whole idea of Dr. Film has always been to make an economical show that appeals to an admittedly small demographic.  Since a 30-minute show means more time, it also means I’d have to charge more money, which I think is more of an impediment than the difficulty in clearing a two-hour slot.

Glory and I talked to publicity people and they told us that there was probably no hope for Dr. Film since no one responded.  Once again, I was ready to shut the project down and move on to other things.

Remember I said Dr. Film just never seems to die?  Well, I had an idea.  You see, I don’t believe anyone who matters has ever watched the show and given it any sort of chance.    I have a feeling that it’s off the beaten path, consequently under the radar.  I don’t think it mattered what sort of picture we had.

I realize that Dr. Film is an unconventional project.  I know that there is a niche market, but we have to reach it.  My idea was to draw upon on word-of-mouth support and an internet community.  If we have a vibrant Facebook group, a bunch of advocates for the show, a successful blog, then people have to notice it.  Someone floated the idea that “Support Dr. Film!” t-shirts would be a great idea.  A way to build the community feeling.

That’s fine, I thought!  I’ve got art for shirts!  We’re set!  I’d designed a shirt for a convention showing, and I still had the files!

Then, just as I was ready to submit the design, a couple of people, all generally supporters of the show, told me how much they hated the shirt.

They hated that same picture I’d literally sweat over for hours.  And hate was the word.  It was repulsive.  One guy told me he’d never wear the shirt because it looked like a bondage scene to him.

I have to tell you that I never thought of this.  Knowing the characters, and knowing that there is not a spark of anything between them, it never occurred to me.  Not once.

OK, so what should we have instead?  This is where I get frustrated.  Once again, people can’t seem to tell you what they like.  It’s the old joke, “I don’t know much about art, but I know what I like!”

Some ideas were in direct contradiction to other ones.  I wanted to scream.  Actually, I did scream.  I thought we were about done, and suddenly, I was back at square one.  I often marvel about how I’ve come this far on Dr. Film with nothing to show for it!

Ernie Kovacs once called Edie Adams and told her that the show opening wasn’t working, and he didn’t know why.  He was joking about being tired and working overtime.  Edie told him that the audience didn’t care how tired they were or how hard they worked.  They only cared whether the show was funny or not.

Edie was right. It makes no difference how we got to the t-shirt design and how we took The Picture That No One Likes!  It only matters that we came up with a design that people seem to like.  On the other hand, it’s a great story and it makes a great blog entry!

You note I’ve not spoken about what I thought personally?  Well, I don’t like the new design (even though I did it.)  I like the other one better.  I don’t think there’s enough art in this one.

But, clearly, I have no idea what I’m talking about!

PS: I haven’t had a chance to take redo the art for the brochure, so you can still see it here.

4 thoughts on “Taking the Picture No One Likes”