I’ve got several feelers out for people in the biz, but this will be our first one. 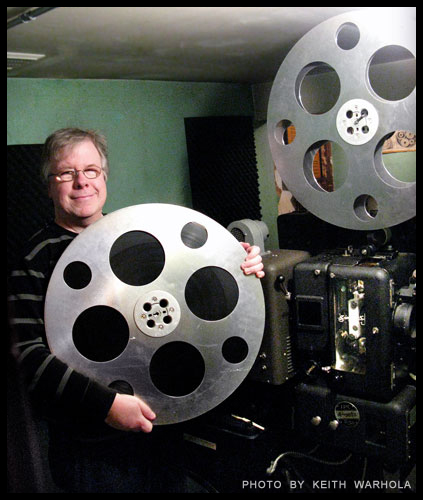 Q1.  I know you have worked with Jerry Lewis on some of his films. We all know Jerry as a philanthropist and a comedian.  Can you tell us a little about what you’ve done with Jerry and how Jerry feels about film preservation?

I began working for Jerry in 1984 and worked for several years as his personal archivist. He owned a huge warehouse on Santa Monica Boulevard in Hollywood that contained material dating back to the 1940’s, including home movies, scrapbooks, photo albums, recordings, transcriptions, kinescopes, etc. It was my responsibility to identify and catalog all of the material. It took two years to get the job done.

He is very supportive of film preservation and has often expressed  his concern over the deterioration of important materials. He has lent his name and support to several projects that I’ve worked on over the years, including the restoration of a 1928 Loew’s movie palace. I know that he has donated some of his vast collection to both the UCLA Archive and the Academy of Motion Picture Arts and Sciences.

Q2. You recently did a show at George Eastman House showcasing some of your 3D collection.  Can you tell us about that?

Jack Theakston and I were asked to present a program on the history of 3-D motion pictures at the Dryden Theater and it was a great thrill. I had never been to the George Eastman House before this event and I thoroughly enjoyed the experience. I brought the only known polarized 3-D print of Robot Monster and the audience loved it. They have a very conscientious staff and I look forward to presenting more 3-D programs at the Dryden Theater in the future. 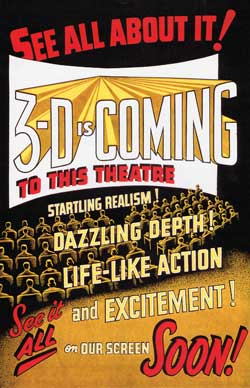 Q3.  Tell us a little more about your 3D work.  You’ve really done a lot to preserve 3D over the years.

Thank you Eric, that’s very kind. I began my work over 30 years ago when I discovered that the studios and copyright holders were not being very proactive in preserving their 3-D holdings. Thankfully, the situation has gotten better at most of the studios. Most recently, we were able to insure preservation of the science-fiction film Gog and that was very gratifying.

The full story of the Archive’s history is on our website at http://www.3dfilmarchive.com/home/history-of-the-archive

Q4.  I recently heard about your quest to bring some 3D Blu-rays out to the market.  Can you tell us about that and how we might be able to help that happen?

We recently provided important research materials to both Warner Bros. and NBC Universal on their 3-D holdings. Thanks to our documentation, both Dial M for Murder and Creature from the Black Lagoon were mastered in their director-intended aspect ratio. It’s the first time both films have been presented in widescreen since the original theatrical release.  Viewers will no longer see the scissors pre-set device on Anthony Dawson’s back or the telephone pole in the upper reaches of the Amazon which were both visible in the open-matte versions. It’s very important to honor the director’s creative vision.

So far as how you can help, my best recommendation is to support the initial two Golden Age 3-D releases on Blu-ray. Dial M is available as a stand-alone release and Creature can be purchased in the Universal Classic Monsters: The Essential Collection Blu-ray set. It’s also available as a single disc, region free disc in the UK. http://www.amazon.co.uk/Creature-Black-Lagoon-Blu-ray-Region/dp/B008LSAQPW/ref=sr_1_1?ie=UTF8&qid=1350684816&sr=8-1

If these titles perform well, it will encourage the studios to dig deeper for other vintage 3-D material. There were fifty 3-D features produced between 1952 – 1955 so there’s a lot of prime stereoscopic material still buried in the vaults.

Q5. I know you’re a big fan of a really short-lived color process called Super Cinecolor.  We’re all geeks here.  Tell us about that and why Super Cinecolor is cool.

My interest began around 40 years ago. As a fan of Abbott and Costello, it always bothered me when their two Super Cinecolor features (Jack and the Beanstalk, Abbott and Costello Meet Captain Kidd) were shown on television in black and white. I eventually tracked down a 35mm print of Beanstalk in the mid-1970’s from an old time distributor in Baltimore, Robert T. Marhanke. I’ll never forget how vivid the colors looked on that 1952 print and it encouraged me to learn more about the process. When seen in an original 35mm print, the process has a very unique look with neon blues and deep, vivid reds which lend itself well to costume films and science-fiction titles. Some of my favorites are The Highwayman, Invaders from Mars and The Magic Carpet.

Because of the unique aspect of the double emulsion stock, it’s very difficult to accurately transfer Cinecolor materials in telecine. When I produced Special Edition laser discs of Beanstalk and Bela Lugosi’s Scared to Death (in two color Cinecolor) I was very careful to replicate the vibrant and somewhat unnatural hues found on the original 35mm prints.

Q6. You were THE GUY who rediscovered the missing color footage for the Star Trek episode “The Cage.”  I know it’s a little asterisk in your career, but it was really important for a lot of Star Trek geeks.  How did that happen and how close was that to being tossed out?

I found the footage in a vault with other negatives, IP’s [Interpositives] and fine grains. The vault was full of material from long-closed accounts and the film would have eventually been destroyed. It was not labeled and was lying on the floor under the bottom rack of a shelf. When I pried open the rusty can, there was a roll of color 35mm negative. I un-spooled the first few feet and when I saw the Enterprise, I realized that I had found something very special. This was around 1987 and Paramount had just released the pilot on home video using color footage from “The Menagerie” with the trims inserted from a 16mm black and white work print. When I inspected the footage, I found that it contained all of the trims removed in editing the two part episode. We contacted Gene Roddenberry’s office at Paramount and made arrangements to return the one-of-a-kind film directly to him.

Q7. Most collectors have a holy grail of collecting, something that they hope might be out there but they haven’t found yet.  Do you have something like that?

Yes, I would love to find the last missing Lippert 3-D short, Bandit Island with 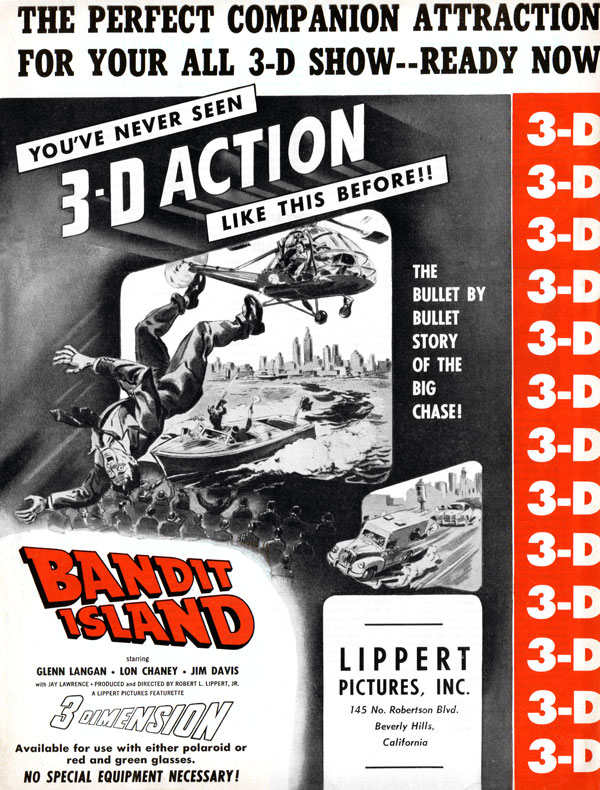 Lon Chaney. It had a limited 3-D release in both polarized and anaglyphic versions in the fall of 1953. One side survives in the 1954 feature The Big Chase but I would love to find the missing side. I tracked down all of the lab records and the 35mm materials were last accounted for in 1954. The only hope for its survival might be a 35mm release print in private hands.

Q8. You’ve long been an advocate of good, strong 35mm projection.  With the advent of good digital projection, do you still feel as strongly about 35mm?

I certainly do. Digital has a clean but somewhat unnatural look to me, especially if it’s been tweaked and scrubbed clean of natural film grain. Plus, there is something special about watching an original 35mm print that was screened theatrically when a film was first released. I often wonder how many thousands of people sat in a theater watching this very same print for the first time on the big screen.

Q9. I seem to recall that you were once working on a restoration of another short-lived process called Perspecta.  Tell us about Perspecta and why that was interesting.  Can you give us a short list of important titles that were released in Perspecta?

I was very good friends with the late Bob Eberenz, the gentleman that worked with Robert Fine in developing the system for MGM. Bob had restored a 1954 Fairchild integrator for me and hearing those films with the original panning and gain control was quite a surprise. Even though it’s still a mono signal, the effect of fullness and left/center/right separation could be very convincing.

I presented an all-Perspecta show on April 26, 2002 at a 1928 movie palace on a fifty-foot screen. We ran Forbidden Planet plus MGM shorts, cartoons and a promo reel. The Fine and Eberenz families were in the audience and it was a very special evening. After the show, I had people tell me how convincing the Perspecta sounded when spread across that big screen.

About ten years ago, Bob and I approached several studios and offered to preserve their Perspecta tracks to a new master so they could be utilized for home video. Unfortunately, none were interested.

Some of the noteworthy films in Perspecta include High Society, Bad Day at Black Rock, This Island Earth, Away All Boats, White Christmas, To Catch a Thief, Invasion of the Body Snatchers, East of Eden and The Barefoot Contessa.

10.  I’ve been asked questions by ignorant reporters all my life.  This is the question I always want to give people: What’s the most important question that I should have asked you but didn’t?  Once you tell me that, please answer that question!

Oh, I don’t know, how about asking if I’ve had any regrets in doing this work?

To that question I will answer, absolutely. Everybody makes mistakes and I’ve made some doozies. But all in all, I’m proud of what’s been accomplished. There’s a renewed and growing interest now in Golden Age 3-D and I’d like to think in a small way, I’ve played a part in that revival. With the technical availability now to master the original left/right elements in HD and align and correct any registration issues, we can truly make these films look better than ever before. That presents a very exciting opportunity to restore and preserve the filmmakers original stereoscopic vision.  I hope to have an ongoing involvement in bringing vintage 3-D material to Blu-ray.

I’ve had a great time chatting with you Eric, thank you so much for your interest in my work.

One thought on “Ten Questions with Bob Furmanek”