I’m going to apologize in advance for this departing from my usual blog format.  I normally like to do reviews or some sort of film thing, but this is mostly about me.  Still, it’s about film preservation, and I think it’s a worthy thing to discuss.

I’d been aware for some time that Kino/Lorber was producing a new Blu-Ray edition of Buster Keaton’s Seven Chances (1925).  It’s certainly not Keaton’s best feature, not by any measure, but it’s a nice picture, and I loved it.  It still has one of my favorite Keaton moments in it: Chased by scads of women who lust after his potential fortune, Keaton has accidentally started a rockslide in order to get away from them.  The women outsmart him and get to the bottom of the valley before he can, while the rockslide gets progressively worse.  Keaton looks up at the rocks, and down at the women, and he’s flummoxed.  He scratches his head as he wonders which fate is worse.  It’s quick, understated, but it’s pure Keaton.  William K. Everson often stated that Keaton seemed to be a visitor from another realm, confused and unaware of our rules and conventions.  This little moment sums that up for me.

But that’s a digression.  The key point is the Seven Chances had a Technicolor opening sequence.  It’s in two-color Technicolor from early in the days of the process, back when it was fairly unstable.  Some years earlier, I’d toyed with restoring the color from Kino’s previous edition, and I had come up with some curves in Photoshop that got the color back to some semblance of the way it used to look.  I had the file sitting dormant on my hard drive.

My friend, film historian Bruce Lawton, has been consulting with Kino on some of their new Buster Keaton Blu-Ray releases.  He’d let the producer of the new disc, Bret Wood, know about the work I’d done on it.  I knew that it had been delayed and pushed forward a number of times.  I also knew that if they could do the restoration in-house, that they probably would, because that would be easier and cheaper.  That was all great.

Finally, Bruce told me that they were making little headway with the color sequence.  Bret sent me some notes and FedExed me the opening sequence at HD resolution from the material preserved at Library of Congress.

Let me back up and tell you that this was at the beginning of October 2011, the 7th to be exact.  I’ll also tell you that I don’t work in film exclusively: I’m also a computer consultant, with a degree in Electrical Engineering.  On the morning of the 7th, I had gotten a call that a client of mine had had some printers fail on him, and I was obligated to spend the afternoon fixing them.  The package from Bret arrived sometime in the afternoon.

Now, October is a crazy time for me.  Everyone wants me to do Halloween movies, and this year was no exception.  I generally run all over my home state of Indiana doing shows.  I also consult and project with the Heartland Film Festival, and that was due to start on the 13th.  I’d also promised my supportive girlfriend that we were going to go off for 2-3 days, a long-delayed break from a hectic schedule.

And then the package arrived…

Well, I had the file, and notes on what I’d done.  How hard could it be?  I was obligated to go out for our local art celebration that night, but not before I’d snatched a quick look at the new files.

Instantly I realized why this was a problem.  The material that I’d recalibrated those years back was from a different print.  The new one was faded beyond use.  I could get only a very little color out of it.  I went off to our artist party and pondered it.

I was about to give up on the whole thing.  I thought that there probably was no hope for it.

Immediately I knew that this would be a lot of work.  My girlfriend and I had been holding out hope that I might be able to do a belated one-day trip, but as this whole thing progressed, I realized that it probably wouldn’t happen.  I knew I’d be lucky to get it done at all!

If you’re about to skip to the end, fearing this is an article with charts, graphs, and math, then fear not!  (I’ve been asked previously to keep this blog a math-free zone.)  I find this to be a human interest story, and I’ve taken as much technical material out of this as I can.  All that’s left is the bare bones to get the story across!  If you’d like to read a slightly more technical version, please refer to the Nitrateville interview I did recently. You can also feel free to ask questions in the comments.

I knew what the calculations would be.  I got Kino’s new video file, located the same frame in my older file, and I realigned the color by hand.  Frankly, I was amazed.  It looked better than the old restoration I had tried, because the new print was so much sharper.

But that was ONE FRAME.  The whole thing is 4440 frames! (I just looked it up, so there.) Bret had already told me that Kino had to have this on Monday the 10th.

How could I possibly do this in such a short time?  I had to think about it. 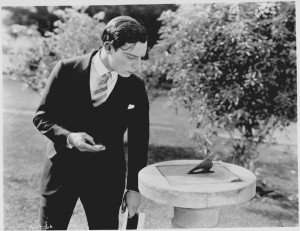 Bruce got my sample frame, and was very enthused about the prospect of resurrecting the sequence. But now I had to figure out how to automate it.  I decided to go to bed and get a little sleep.

When I awoke, I tried several different programs to try to automate this process.  Nothing worked too well.  Frankly, the amount of computation was pretty severe, and it slowed my computer down quite a bit (I have a very fast home-brew computer… remember I’m an engineer.)

I worked on it all day with varying degrees of success.  Nothing was very promising.  Most of the ideas I had involved processes that would simply take longer to run than the time I had left.

By Saturday night, I just about gave up on the whole thing.  I fell asleep at about 3am, upset and dejected.

I woke up Sunday morning to find that my computer had locked up and, despite the fact that I had carefully saved everything, I still needed 2-3 hours to get back to where I’d been.  I figured out a better method, but it required me hand-clicking the mouse over every frame, 4440 times.

I couldn’t look at the restoration while I was doing it, so I clicked away and discovered the whole thing was horribly misaligned.  Well, this takes about 3 hours just to run, so off for another shot.

Round two was much better, but still not usable.  Three more hours.  Round three worked pretty well, but the alignment between the sources drifted a little as it progressed, so it was necessary to readjust at about the halfway point. Another ninety minutes.  Time was tight.

Round three and a half: alignment was finally decent, and color fairly good.

It was now late Sunday night.  I had not left the house or showered in over two days.

I finally had a pretty good color version, but I had to get it to Bret, and it was 700MB (very very large)!  I set it for overnight upload, and I hoped they could get it in time.  By Monday morning, I had another idea for a slight update, which I did.  It arrived by Monday afternoon.  I know that my results were further corrected in Kino’s color suite, but I only had time to send what I had!

Bruce and Ken Gordon finished recording their commentary, which Bruce then feverishly edited and uploaded for Bret, and so ended a long weekend.  Wrong.  Bret was excited enough about my results on the color sequence that he wanted me to record a commentary for it.  By this time, I was in the midst of 16+ hour days at the Heartland Film Festival, so I came home, recorded a little, and tried again.  I hope it sounds okay.  I fear I sounded like a horrid idiot, but I was wiped out!  I slept very hard in November… trust me!

I had a moment of insight on that Friday night that I’ll share with you.  I realized (as did Bruce) that I might be the only person in the world who could and would do this restoration.  I know that sounds pompous, but it really isn’t.  My girlfriend remembers discussing this with me and encouraging me to go on with the project.  She felt so strongly that I should pursue this that she was willing to give up the vacation.    It needed someone familiar with early Technicolor, a competent computer user, a guy who knows how complex non-linear color filtering works, and someone who cared enough to lose a complete weekend doing it.

I thought that there might not be another person who could do this, and I feared that if I didn’t do it, then it might never be done.

That’s why I had a lost weekend with Buster.  Bruce and Bret wanted him to shine in color once again.  So did I.

Thanks to Kino/Lorber for permission to use these images and to Bruce Lawton for finding the rare stills.

4 thoughts on “The Lost Weekend With Buster”