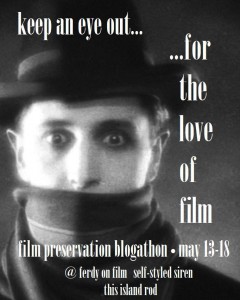 Find out more on the Film Preservation Blogathon here.  Donate here.  The host blogs are Marilyn Ferdinand’s and Rod Heath’s.

I read about this blogathon with some interest.  They’re raising funds for preserving and distributing The White Shadow (1923).  This is a worthy project, since it’s one of those films that won’t be preserved by normal methods.  We only have the first half of this film that Alfred Hitchcock co-directed.  It isn’t really a Hitchcock film, and it isn’t complete, and Hitchcock remembered it as not being very good.

Exactly the kind of thing I’d love to see!  Why?  Because it will show just how Hitchcock developed as a director, and I love the work of some of the actors (especially Clive Brook) in the picture.

And since it’s not really terribly historically important, and incomplete, it will get shoved on everyone’s back burner.  Again, that makes it the film I want to see.

I’ve been reading over the blogs on the blogathon so far, and there are quite a lot of them about Hitchcock and Hitchcock-related films.  It got me thinking how I could contribute in my generally contrarian way, not really talking too much about Hitchcock, which I think is being covered adequately by others.

What isn’t being adequately covered is the thing that is most dear to my heart, which is film preservation itself.  I got myself to thinking what other projects I’d love to see preserved.  Now, many of you loyal readers (I realize this is an impossibility since I have too few readers to be called many!) will cry foul.  Since I am involved in film preservation myself, I’ll naturally pick projects that I’m already involved in.

Well of course!  That’s why it’s my blog.  If you’d like to rant about your own special projects, then write about them in your blog.

Here, then are some of my top picks, in no particular order.  I have restricted these to films that actually exist and could be preserved or restored, but nothing is currently being done.

No, there’s no Greed here, no London After Midnight, nothing really earth-shattering.  There is a great deal of material that’s interesting and historically important.  Some of it may be preserved eventually, some may see the light of day, but I expect some to continue languishing.

That doesn’t mean I’m not in there fighting!

I love the idea of a blogathon that actually results in a film being preserved.  I have always been told that no one cares about old films, particularly silent ones.  Please, just for me, prove those people wrong!

10 thoughts on “My Top 13 Films That Need Preservation”