The holdout justice insists he doesn’t need to see the movie.  He’s voting for it to be shown, no matter what.  He feels that the First Amendment is sacrosanct and any chipping at it lessens us all.

There’s been a lot of hubbub on one of the movie collector forums about Disney’s Song of the South (1946).  This is one of the few films Disney has never released on home video… well, one of the few popular color and sound films.  I’ve never seen it.  Its last theatrical release was a rather sparse one in 1986. 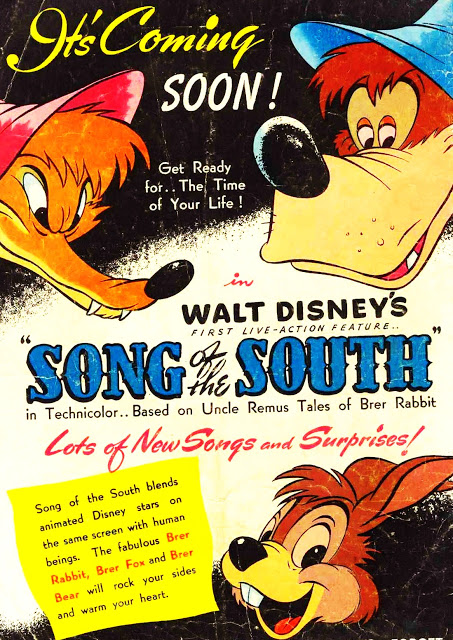 I never understand this stuff.  It cuts across political barriers, too.  Basically, the criterion for banning something is “I don’t like it.”  Books, movies, music, you name it, someone wants to ban it.  It’s often in the name of “the children.”  We wouldn’t want to expose children to this sort of thing, would we?

Let’s look at what this is, instead of our opinions about it:
James Baskett won an honorary Academy Award for the film.
Oscar winner Hattie McDaniel appears, the first African-American woman ever to win an Oscar.
Walt Disney considered Baskett a discovery, one of the best actors he’d found.
The work with animated characters superimposed over live action is groundbreaking, especially in a color film (this was shot with the three-color Technicolor camera.)
It’s one of the last works of legendary photographer Gregg Toland, the cinematographer of Citizen Kane.

Is there racial stuff it it?  Sure.  Is it insensitive by modern standards?  I have no doubt it is.

Should parents plop their kids in front of it without explaining it to them first?  NO!  But that goes for a lot of stuff.  The television is not an electronic babysitter,  nor is the iPhone or any other device.  Sure, there’s a lot of mindless stuff out there that can just be watched, and this isn’t one of them.

I haven’t seen Song of the South.  I don’t need to.  It should be out there to be seen.  If we have to get Leonard Maltin, Whoopi Goldberg, or Bill Cosby to do an introduction, then fine.  It should be seen.

This reminds me of an interchange I had with a friend of mine who I’ll only identify as “Chef Carl.”  I was asked to come up with a program for Black History Month.  OK, I said, let’s show how racism once rocked the movies.  Let’s really show it.  I had some good examples.  They wouldn’t let me do it.  The manager of the theater said it would be perceived as insensitive because I’m white.  OK.

So I thought about all the African-American folks I know and thought, “Who’d be the best one to introduce these pictures and explain the history of them?”  I thought of Chef Carl.  He even agreed to do it.  Then the manager came forward and wouldn’t allow Carl to do it either.  Why?  Well, they were afraid that Carl would be seen as a “token black,” which was bad, too.  I told Carl about it.  I still remember his answer:

There’s a similar uproar with Birth of a Nation (1915), which is a DW Griffith film.  Birth of a Nation changed the world.  It was the first time that it was clear that a long, feature-length film could make money and keep making money.  It caused the landscape of movies to change.  Vaudeville houses switched over to movies.  Movie houses changed from flat Nickelodeons to raked, long theaters.  Theaters put in extra projectors to make smoother changeovers.  It was a big deal, and it made money in the North and South, wherever it played.  It’s a good film, it’s a landmark film, and it’s one of the key films in the history of the motion picture.

It also sparked a resurgence of the KKK in America.  There was a lot of racist content, and one of the Klansmen is a hero.  It was true to the book it was based on, which was also racist.  Without even really understanding what he did, DW Griffith made a racially polarizing film in 1915.  It was so polarizing that he got death threats and there were Klan rallies that showed the film to whip up support for a new (and very different) Klan.

Griffith (a child of Kentucky) felt so awful about the film’s reception and what it did that he made a followup called Intolerance (1916) that made the age-old plea of “Why can’t we just get along?”  Just how racist Griffith himself was is the stuff of much speculation.  I can simply state that Madame Sul-Te-Wan (1873-1959) a long-lived African American actress, appeared in Birth of a Nation.  There’s also a reel of home movies shot at DW Griffith’s funeral in 1948.  She’s in that reel, too, crying and needing support from others, the only person in the whole reel who seemed to be moved at the occasion.

If DW Griffith was the evil, racist pig that many modern authors make him out to be, then why was Madame Sul-Te-Wan so moved at his funeral?  She knew him… we didn’t.

Shouldn’t we see the film for ourselves to find out?  Or, if we choose not to, shouldn’t we be free in that choice, too?  There have been protests at showings of Birth of a Nation even as recently as a few years ago, rife with cries of “It should be banned!”

Let me give you an example of what I’m saying.  When FW Murnau made Nosferatu in 1922, he stole it from the novel Dracula.  Let’s be honest, he stole it.  They changed all the names around, but the plot is barefaced and recognizable.  The book was very much in copyright and Murnau was sued.  The studio lost, and the film was ordered destroyed.  All prints, and the negative, too.

Nosferatu became forbidden fruit!  Film pirates the world over clamored for “the last print.”  There were a lot of “last prints” saved, duped, and bootlegged.  It got way more release in foreign countries than any of other Murnau’s films did.  He became a popular director mostly because of the fame of a movie that no one was supposed to see.

So consider Der Januskopf (1920).  This was another FW Murnau film pirated illegally from a novel and play.  In this case it was Dr. Jekyll and Mr. Hyde by Robert Louis Stevenson.  It became Janus-kopf (Janus head) and the two characters were Dr. Warren and Mr. O’Connor.  The dual role was played by Conrad Veidt.  Veidt’s butler was played by Bela Lugosi, who was on his way from war-torn Hungary to America.  This is one of his few appearances in a German film.

Historically important?  You bet.  But no one sued over this film, and there was no clamor over its illegal piracy.  No one bootlegged the last prints or the negative, which stayed in storage until it rotted.

Two films, one director, both pirated, one forbidden fruit, and one completely legal.  The forbidden fruit survived.  Stamping out the idea perpetuated it.  Today, you can get a version of Nosferatu on any street corner, in various versions, cuts, tints, and speeds.

And is that different now?  Nope.  Song of the South is forbidden fruit.  It’s out there.  As of this writing, there are 85 copies on eBay for sale.  Those are just the ones who are brazen enough to post them.

Just 10 copies of Steamboat Willie for sale, though.  That one… it’s always been available.  It’s a landmark Disney picture, the first cartoon with sound, the first big Mickey Mouse picture, and 10 copies.

So is Song of the South a great film?  I have no idea.  I might like it, I might not.  I might be offended, and I might not.  My advice to Disney is to make it available and therefore control the dialogue about the film.  Now it’s forbidden fruit.  You can make it a “Never Forget” historical item, which it needs to be.  You can also make sure that everyone knows why it’s historically important.

By the way, I don’t want political comments in the comments section or I’ll shut it down.  “Those liberals” and “Those Republicans” are equally guilty of censorship, albeit often for different reasons.  This isn’t a political forum.  It’s a film forum.