I hate lists like this, but I know people love them.  I’ve deliberately not included material that’s long been available but recently released on video.  These are all things that have never seen the light of day and have been rediscovered this year.  So, for example, Ben Model’s Musty Suffer series doesn’t make the list, because those films have been out there and known about for years (I’ve seen a number of them).  On the other hand, his Accidentally Preserved DVDs do make the list, because they highlight previously unknown films.

I’ve also plugged my restoration of King of the Kongo quite enough for most of you.  We’re doing another chapter, and I’m sure there will be more plugs to follow.  The fact that we’re reuniting the sound and picture for the first time since 1929 is still quite cool.

AND NOW, THE LIST!
10. Hey, is that SuperCinecolor?  This is film preservation and history for geeks, but in 1948 there was a strike at Technicolor that caused a slowdown in their production of prints.  For a while, Warner Brothers had Cinecolor print their product for them, to the point that a few cartoons from this period are actually credited as being “IN CINECOLOR.”  But Cinecolor was a two-color process, and Technicolor was a superior three-color process.  All the Cinecolor cartoons, when seen today, are three-color.  What’s the story?  Well, this year, a few cartoons popped up on eBay that show all the earmarks of being in Cinecolor (reddish/purple edge codes for one), but are definitely three-color, because they have vibrant blues and greens in the same shot, something regular Cinecolor couldn’t reproduce.  Even stranger, these are 16mm prints.  Cinecolor eventually employed a process called SuperCinecolor, a three-color process, but that didn’t find its way into theaters until the 50s, and then always in 35mm.  So why are these prints in SuperCinecolor several years before?  I’m not sure, but I suspect it involves avoiding patent lawsuits with Technicolor that didn’t expire until a couple of years later.  Wanna hear more about this?  I can elaborate!

9. Monsters of the Moon (1939).  OK, this is a film that I found, but I’m excited about it.  A couple of aspiring filmmakers made a long promotional film based on their idea of Martians invading the moon.  It was a clever mixture of stop-motion and live-action.  It plays like a long trailer, but it was supposed to attract the attention of big-time Hollywood producers.  Unfortunately, the producer it attracted was William Pizor, a bargain-basement filmmaker if there ever was one.  Pizor bought the footage and put his name on it in dim hopes that he could raise money to finish the film. (It should be noted that Pizor was the producer of Murder by Television, which was highlighted in episode one of the Dr. Film TV show, which you’ll see if I can ever sell it!)   Monsters of the Moon never went anywhere.  The only known copy of the film ended up in the hands of Forrest J. Ackerman (long-time monster fan and editor of Famous Monsters of Filmland), who took the footage, recut it a bit, added some girly footage at the end, and showed it at the first WorldCon in 1940.  He lost the film afterward, finding it again a few years later, when he gave it to (please hold your hisses) movie mogul Raymond Rohauer, who added some titles, showed the film once, and kept it.  Ackerman saved stills of the film and touted it as one of the great lost films.  It showed up on eBay this year, in its original form, with Pizor’s name on it, proving that there was actually more than one print struck.  What will become of this?  Stay tuned!

8. Accidentally Preserved.  Ben Model is a marketing genius.  Many of us who do film preservation work have stacks of one-off films that aren’t “cool” enough to merit video releases.  In many cases, they’re the only surviving prints of a particular film, but, as I always say, “It’s the law of supply and demand.  You may have a unique film, but if no one cares, then it still has no value.” Ben and I agree that an important part of preservation is presentation.  If no one sees the films you’ve preserved, then they might as well be lost.  Ben has done something I’ve never been able to do, and that I’ve not seen anyone else do, either.  He’s made people care about oddball silent shorts, and he’s getting people to buy DVDs.  That’s really, really great, folks.  It means that more stuff like this will become available.  It helps everyone. 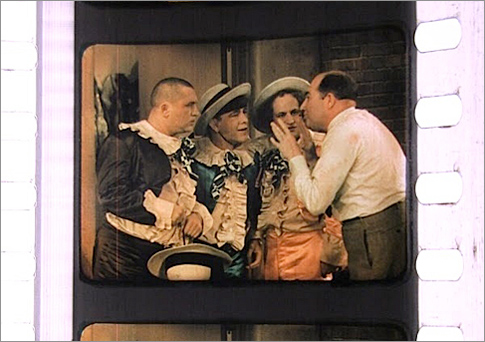 7. Hello, Pop (1933)  This has been a great year for recovering Technicolor footage.  Few people know that The Three Stooges worked for MGM before they went to Columbia, the studio where they gained fame.  MGM even made a few early two-color Technicolor shorts with the Stooges and their then-leader, Ted Healy.  The MGM Stooge shorts tend to be highly variable, and  today Ted Healy comes off as abrasive and annoying.  Still, this is an important stepping-stone for the Stooges, and there are very few two-color Technicolor shorts that survive.  Always a poor judge of comedic talent, MGM fired the Stooges and kept Ted Healy.

6. Whoozit (1928) If you know me or read this blog with any regularity, then you’ll know that I’m a huge fan of comedian Charley Bowers.  Among the most neglected of silent comedians, Bowers’ work has been passed over because nearly all of it has been lost.  Over the past 15 years or so, bits of his work have been popping up piecemeal, and they reveal an artist unlike anyone who came before or since.  That’s not superlative, folks… Bowers was unique.  Whoozit is Bowers’ second film under his contract with Educational Pictures.  He’d been with FBO the previous year, and those films had been successful, but they bounced him out anyway.  Contemporary reviews claim that this film is better than There It Is (Bowers’ first at Educational.)  Given that There It Is is now considered a minor classic of silent comedy, I have high hopes for Whoozit.  Thanks to preservationist Serge Bromberg and the EYE Institute for digging up this gem. 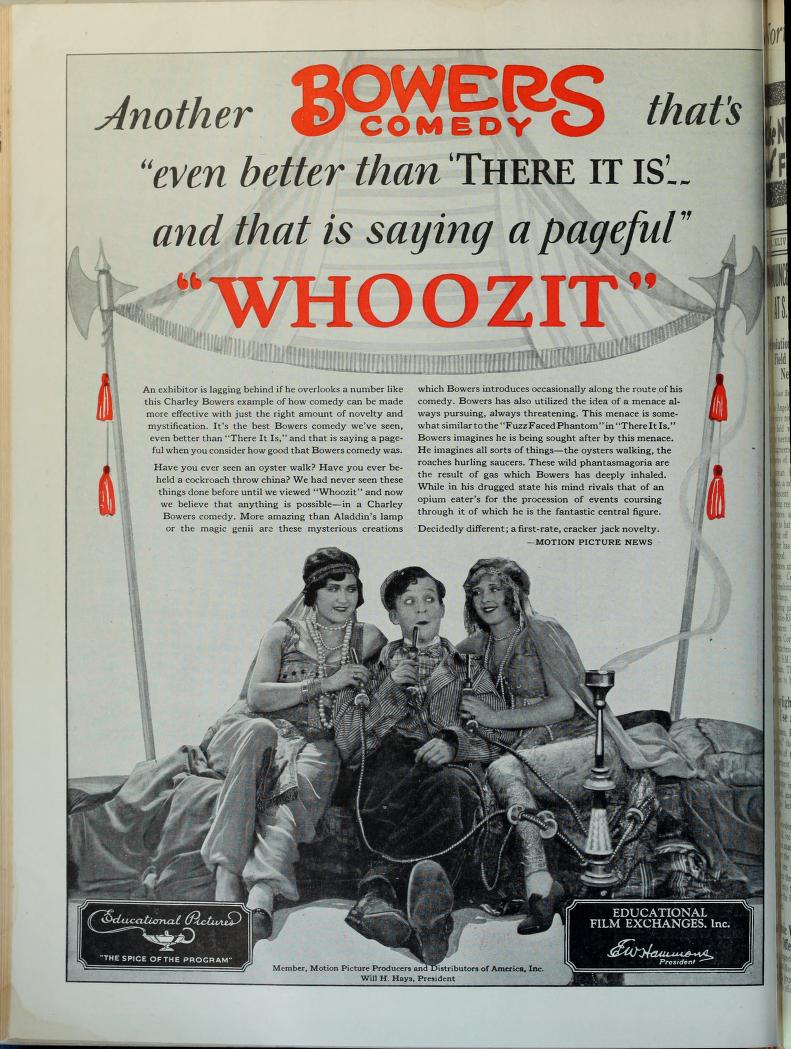 5. Dearth of a Salesman and Insomnia is Good for You (both 1957) These are both short films featuring a young Peter Sellers, who was just beginning his career in feature films.  If that isn’t cool enough, they were both co-written by the legendary Mordecai Richler, author of the Jacob Two-Two series and The Apprenticeship of Duddy Kravitz.  I  have a feeling that these will be just plain hilarious.

4. Their First Misunderstanding (1911) What’s not important about this film?  Pretty much everything is.  It’s an early film from Independent Motion Pictures (IMP), which became Universal over the next year or so.  It’s the first film in which Mary Pickford got billing.  It was directed by George Loane Tucker (Traffic in Souls and The Miracle Man) and Thomas Ince (Civilization).  Oh, and it co-stars Owen Moore, who was married to Pickford at the time.  I can’t wait to see this.

3. Dr. Who: The Enemy of the World and The Web of Fear.  In the 1970s, the BBC stupidly erased a big chunk of the Dr. Who episodes from the 1960s.  The first doctor, William Hartnell, was affected badly, but the second, Patrick Troughton, had the majority of his episodes destroyed. The BBC had sold 16mm prints to TV stations in Africa and New Zealand (as well as others), which is where a few episodes have been found, but there has been a discernible slowdown in recovered episodes in the last few years. Philip Morris (not the cigarette company) has been traveling the world literally being a filmic Indiana Jones to find abandoned TV episodes.  He’s been kidnapped by pirates and arrested many times.  Morris found 9 episodes (almost two complete stories) and returned them to the BBC.  They paint a new portrait of Troughton’s Who, since he gets to play multiple parts in one (and quite well), and we finally get to see the first appearance of stalwart Brigadier Lethbridge-Stewart (here not yet ascended to full rank.)  Great shows, so lovingly restored that they look like BBC 2” tape from the 1960s even though they came from 16mm kinescopes.

2.The Mysterious Island (1929) This has been available for years, but only in black and white. The Czech film archive has located an original Technicolor print. Sure, this is a disappointing film, with an early music-and-effects track (and some talkie sequences). Two-color Technicolor was a novelty at the time, and particularly a film that had a measure of underwater footage (although much of it here was faked.)  This is important as one of the first MGM talkies, one of the first Technicolor talkies, one of the first color/sound science fiction films, and it was directed by Benjamin Christensen (at least in part) before he was ousted from the project.

1. Too Much Johnson (1938) has got to be one of the Holy Grails of film preservation.  The only print was thought to have burned in the 1970s, leaving it a big question mark in the career Orson Welles.  OK, we know it’s not a great picture: it was intended to flesh out a play that tanked and Welles was threatened with legal action on it anyway.  It was never shown in public, but what was a movie with the Mercury Theater people shot three years before Citizen Kane like?  The mind boggles.  I haven’t seen this yet, but I’m looking forward to it! 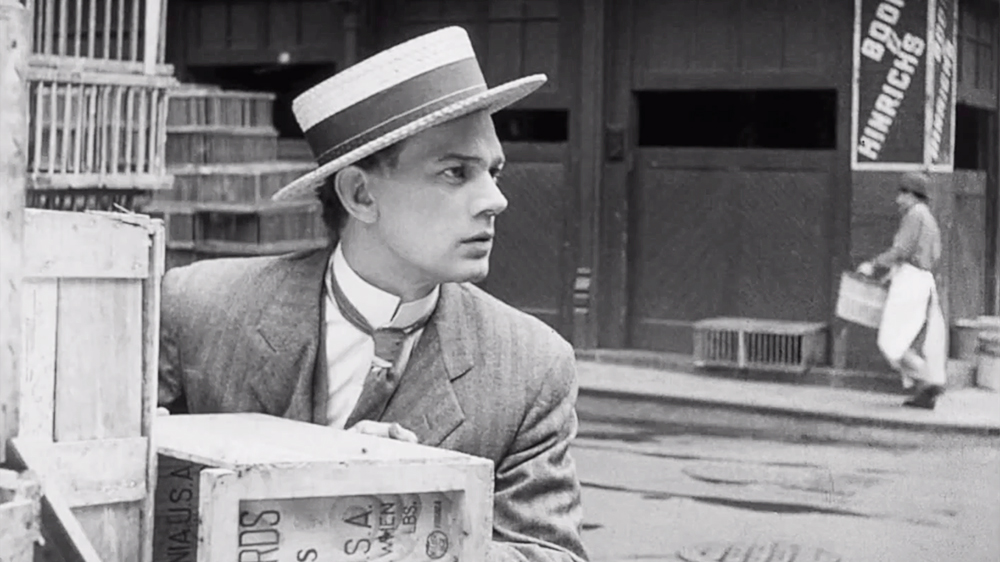